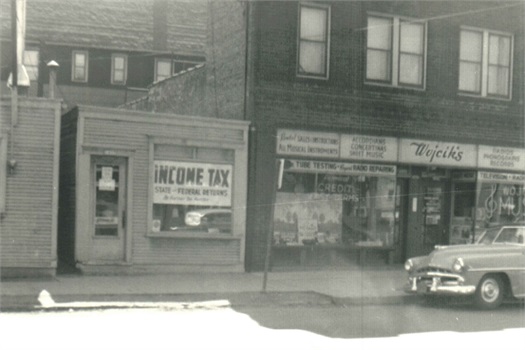 This is where Acc-U-Rite Tax Service began.  This location was only used for the very first tax season as the building was unavailable the second year. 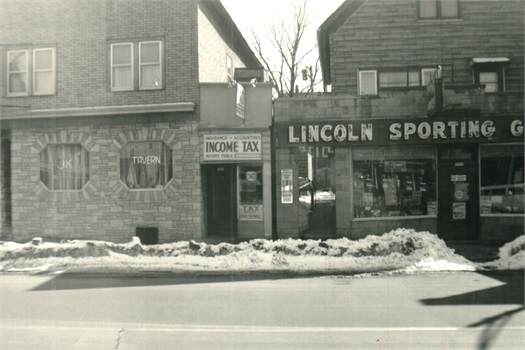 The second location was very narrow.  The office was 19 feet long, but only 6 feet wide!  In addition, there were no bathroom facilities. 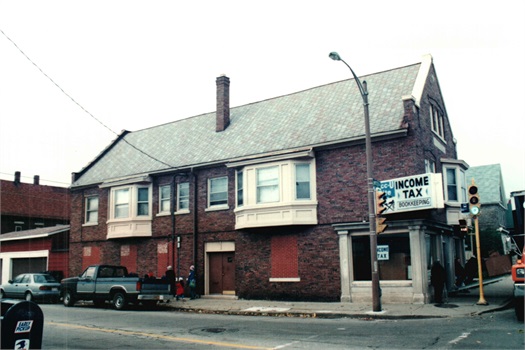 This was the primary location for almost 30 years throughout the late 60's, the 70's, the 80's, and into the early 1990's.  This had been a funeral home before Acc-U-Rite purchased the building and relocated.

Acc-U-Rite Tax Service was formed in January of 1957.  The founders of the company were Charles (Chuck) E. Metzger and Thomas G. Young.  The very first office was located at 1435 W. Lincoln Ave in Milwaukee, WI.  This was a small building between Southside Beer Depot (also known as "Lefty's") and Wojcik's Record Store.  The office equipment consisted of borrowed library tables and waiting chairs.  There was one full keyboard adding machine with the filing cabinet consisting of an Oleo Margarine box perched on a card table.  These were auspicious beginnings for the company.

This first tax season of Acc-U-Rite Tax Service had Diane Young (Tom Young's wife) working afternoons and taking in information while Chuck and Tom would prepare the tax returns in the evening during the week and all day on Saturdays.  Both of them worked full time jobs with Tom being employed at Pressed Steel Tank and Chuck being employed at Ladish Company.

The building at 1435 W. Lincoln Ave had been rented for the first tax season only and this location was not available the next year, so this necessitated a search for a new facility.  At this time in the late 1950's Lincoln Ave was a street that was bustling with activity.  Chuck and Tom did settle on an office at 1551 W. Lincoln Ave.  This location in the second year of operation was very narrow!  The office was nineteen feet long and only six feet wide, without any restroom facilities.  If anyone needed to use the restroom then they could go to the Tavern next door or Red's Lunch to the east just across 15th Place.

This location needed some redecorating before it could be used as a tax office.  On a cold day in December both Chuck and Tom painted the walls.  This was not really a well insulated building, but the paint stuck to the walls.  In April, near the end of that tax season, the paint starting peeling off the wall in sheets during the spring thaw since the paint had simply frozen onto the walls!

At this location Chuck and Tom had learned their lesson and rented the office for the entire years so as to eliminate looking for a new office the next tax season.  They custom made the desks out of plywood approximately 4 inches wide with a client chair at each desk and a typing table in between.  The typist would type each return as Chuck Metzger and Tom Young prepared them.  Doreen Metzger (Chuck's wife) and Diane Young were both working part time in the afternoons to service the office.  Rent was $25 per month, which included the heat!  After three years at this location the business was growing and Acc-U-Rite Tax Service moved to accommodate this growth.

In 1984 Tom Young was diagnosed with cancer and sold out his half of the business due to his failing health.  At this time Paul Wickert (Chuck's son-in-law) and Richard Metzger (Chuck's brother) became partial owners.  Acc-U-Rite Tax continued to grow throughout the 1980's and early 1990's with their two locations on Lincoln Ave and North Ave.  Paul Wickert began providing financial services in the late 1980's through H.D. Vest Financial Services, which is now known as Avantax Wealth Management®.

In November, 1994 Acc-U-Rite moved into larger quarters at 6320 W. Forest Home Ave from the Lincoln Ave location.  In 1998 the North Street location was sold and all tax preparation was processed through the Forest Home location, which is where we are currently located to this day.  Chuck 'retired' by selling his ownership interest in the business to Paul and Richard, but stayed on during tax season to continue to work with his clients.  Chuck spent nearly 15 years in a semi-retired state by working during tax seasons.  His final tax season was in 2013.   Chuck passed away on January 27, 2018.

Richard semi-retired in the early 2000's, selling his portion of the business to Paul Wickert, who became sole owner and President.  Richard kept working with some of his clients during tax season as part of his retirement.  Richard fully retired in 2018.

On January 1, 2020, Paul Wickert sold the business to Jason Rose, an employee at Acc-U-Rite since 2010.  While Jason is not related to the founding family, he worked with Chuck for several years prior to his full retirement.  In addition, Jason's Great Aunt Susie worked at Acc-U-Rite for 35 years, and was instrumental in arranging the initial meeting between Paul and Jason back in 2009.

Since the ownership change, Jason has been attempting to steer the Acc-U-Rite business through the nebulous and choppy waters of a world wide pandemic of COVID-19.  Acc-U-Rite Tax had to change their style of tax preparation by pivoting from doing the returns live and in person to drop off only literally overnight.  Through the last two tax seasons we are changing to a hybrid model that incorporates live in person tax preparation or drop off.

While the style of tax preparation has changed over the years; from typed tax returns with the original two owners in the 1950's to the handwritten tax returns with four layers of carbon paper in the 1980's to the advent of computers in the late 1990's, one thing has remained constant through all six plus decades of business.  We are a family business that cares for our clients tax and financial needs before, during, and after tax season.  Regardless of whether you are a client that has been with us "since Lincoln Avenue" or a new client, we will always do our best to ensure an accurate tax return and provide tax planning to cover your unique tax situation.